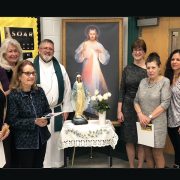 Congratulations to our parishioners who made their Marian consecration on Feb 11, 2018. We will have more on our Legion of Mary chapter later this month on the St. Katharine Drexel Mission website. The Legion of Mary meets every Monday at 3:00 PM in the SKD Mission Office. If you would like to learn more, please join us!

Each month during the upcoming year, St. Katharine Drexel will highlight a church ministry. We kick off the year with a look at the Father Jon O’Brien Council of the Knights of Columbus.

January 14 marked an important day for the Father Jon O’Brien Council of the Knights of Columbus. With the support of local Knights from other parishes, a special Charter Ceremony signaled the official launch of the Council. Father Murphy served as Ceremony Chaplain and shared his excitement about the establishment of the Father Jon O’Brien Council, named after St. Katharine Drexel’s long-time celebrant instrumental in the growth of the mission.

In a ceremony presided over by Knights of Columbus District Deputy Craig Radcliff, newly appointed Grand Knight Greg Murray was presented with the framed chapter declaration. Thirty-four charter members from the Father Jon O’Brien Council were in attendance for the event.

Through the work of Father Michael J. McGivney, the Knights of Columbus was officially chartered as a fraternal benefit society in 1882 under the founding principles of charity, unity and fraternity. The Knights of Columbus is one of the largest fraternal charitable service organization with more than 1.9 million members in over a dozen countries. Members are Catholic men who come together through faith to support their Church and local, national and worldwide causes through charitable action.

A driving force behind the creation of the Council, Craig Radcliff explained that, “efforts to form a Knights Council began when SKD parishioner Patty Kuntz notified him that Father Murphy expressed interest in the formation of a Council.” From that point on, you could find Craig in his red jacket talking to current and future Knights after Mass.

With strong support from the parish, things moved quickly. In January 2017, the SKD Round Table was formed. This past September, the Father Jon O’Brien Council #16793 was created. The Knights got to work immediately in October, sponsoring and running the first St. Katharine Drexel Fall Festival with over 300 parishioners in attendance. During Advent, 21 members from the Father Jon O’Brien Council assisted the Our Lady of the Rosary Council in selling Christmas trees at Holy Trinity Church which in turn donated $2,000 of the proceeds to the Council.

That leads us to January 14, when the Charter Ceremony took place with support from the Bishop Flaherty Assembly & George Brent Council. An active Knight and an officer with the Fourth Degree, Greg Murray’s responsibilities as Grand Knight include coordinating the installation of officers and members, appointing committees, monitoring programs and activities, and scheduling services for departed Knights.

“Our guiding principal is charity,” explained Greg Murray. “Activities focus on the Parish, Catholic Church and community.”  Mutual aid is offered to members in need, and fellowship is promoted among members and their families through educational, charitable, religious, social welfare, and public relief works.

What’s up next for the Father Jon O’Brien Council?
Murray shared that future plans include efforts to support KOVAR, a Virginia Knights of Columbus Charity that provides support for individuals with intellectual disabilities. During Lent, a dozen Knights will be working at the All Saints’ George Brent Council Lenten Fish Fry to raise money for KOVAR. The Knights are also planning other events focused on parish youth, diocesan Seminarians, Culture of Life events, the House of Mercy, and the SKD community.

Membership in the Knights of Columbus is open to men 18 years of age or older who accept the teaching authority of the Catholic Church, live according to its precepts, and are in good standing with the Church. There are four degrees within the Knights of Columbus. Each degree ceremony imparts a lesson on the Order’s core virtues of Charity, Unity, Fraternity and Patriotism. Fourth Degree Knights participate in funerals, baptisms, Confirmation, local parades and community events, and activities in support of the Bishop.

Those who are interested in learning more about the Father Jon O’Brien Council are encouraged to approach a fellow Knight after Mass or visit the Knights of Columbus website. “We are looking forward to growing our Council and we invite parishioners to get involved in this faith affirming organization,” added Murray.

The Saint Katharine Drexel Knights of Columbus Council meets on the third Thursday of the month at 7:00 PM at the Mission Office moving February 1st to 4100 Millcreek Road in Haymarket, VA. 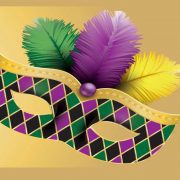 Save the date for the 3rd Annual SKD Mardi Gras Ball on Saturday, March 2, 2019. Tickets go on sale in January and all proceeds will benefit the SKD Building Fund.

The committee is seeking assistance with the following items:

As many of you know, St. Katherine Drexel Mission has been working diligently towards the goal of building a permanent home for our Catholic community since early 2014, when the Building Committee was formed.  Our progress thus far is the direct result of the financial sacrifices many of you have made plus your prayers and support. Since these efforts started, we have made amazing progress – both on the building project and towards becoming an active parish where we gather to worship God in fellowship as we share our Catholic faith.

To build a thriving parish, we need not only a physical building but also a strong sense of belonging and community. Father Murphy, the members of the Building Committee, and I would like to take this opportunity to provide you with a brief update, let you know what we’ve done this past year, and the exciting things planned for 2018.

2017 was a very productive year. Although you did not see physical progress (excluding the new, larger sign erected in early December), many enabling activities occurred in the background which are essential for project success. As with any large project (and this is a large, complicated project), it is not simple and it takes time, patience, money and some luck.

In 2018 we plan to significantly increase our communications, fundraising efforts, and outreach activity.  To that end, we will do the following:

Thanks for all your support and prayers. Wishing you a blessed New Year!

P.S. – If you would like to contribute to the Building Fund, please visit our FaithDirect page to setup a single or on-going contribution. Thanks for your support!